Rev. Yuki Sugahara: What Is the Meaning of Life? 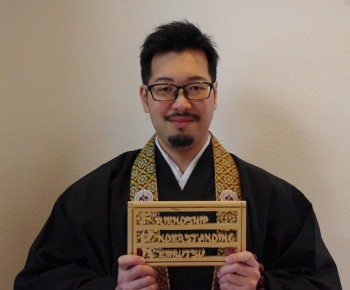 Excellence Reporter: Rev. Sugahara, what is the meaning of life?

Rev. Yuki Sugahara: Simply saying, the meaning of life is to “realize how our lives are existed.” We often mistakenly understand our lives in selfish manner and focus on the idea of “I.” However, our lives are not existing independently… we are not able to live even for a single moment without the supports of the others.

The Buddhism talks about Dependent Origination. For instance, I am the fifteenth generation of my home temple in Japan. If my calculation is right, I have at least 32,766 direct ancestors. This number of people could not fit into the Oracle Arena; they could fill two-thirds of AT&T Park. If we were talking about a basketball or baseball game, the game would go on even if one spectator was missing. However, our lives are not that simple. If we lacked one person from our past, we would not be here today.

Let me share the other example with you. The founder of our tradition (Jōdo Shinshū), Shinran (1173-1263), received letter from one of the members to inform that Shinran’s disciple passed away. Usually, when people pass away, we say that “I’m sorry about the loss,” but Shinran replied as: “although scarcely unexpected…” If we viewed his words from the opposite side, it could mean he was not surprised by the fact that people have to leave this world someday, but he was surprised by the fact that we are living this moment. When we deeply think about it, it is natural thing that we have to leave this world someday regardless of ages. But, living this moment is really an amazing thing… we are able to live this moment because of the support of the lives of many others.

If we take this life for granted, there are no joy of living this moment and no appreciation to the life we are receiving each moment. However, if we are able to change the view of how our lives are existed, how we live this life will be changed.

We, all living beings in this world, are living this life which cannot be taken for granted. There might be the differences of the philosophies and values, however, every lives are the lives which are supported by the lives of so many others regardless of the philosophies, religions they believe in and the values of what is good and bad. Every lives are precious because of this fact. When we realize this, then, why don’t we take each other’s hands instead of hating each other? Why don’t we try to understand each other instead of offending the differences?

~Reverend Yuki Sugahara is from Jōdo Shinshū tradition. He is from a temple family called Kōrinji (father’s side) and Gokurakuji (mother’s side) in Shimane prefecture, Japan. He was ordained in 1996 when he was a freshman in high school. During Reverend Yuki’s junior year in high school he came to the United States and lived in Rochester, New York for a year as a Rotary Club exchange student.

Reverend Yuki studied Political Science at the Ritsumeikan University in Kyoto. During that time his mother suddenly passed away and it was shortly after that Reverend Yuki decided to get his Kyoshi/Teacher Certification which he then received in 2002. In 2009 Reverend Yuki came to the United States to attend the International Ministerial Orientation Program at the Jodo Shinshu Center in Berkeley, California. Then in July 2011 he was assigned to the Buddhist Church of Florin. Rev. Yuki also obtains B.A. in Human Studies (major in Buddhist Studies) from Musashino University in Tokyo, Japan.
www.FlorinBuddhist.org