Chitravina N Ravikiran: The Meaning of Life and the Two Dimensions 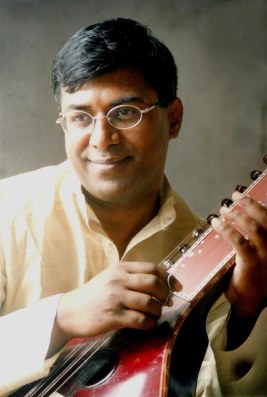 Excellence Reporter: Ravikiran, what is the meaning of life?

Chitravina N Ravikiran: The meaning of life can vary in several ways depending on the dimensions.

1. From a Cosmic perspective, I view life as a transferable job. Each individual including the tiniest of microbes is

(a) sent to different parts of the universe with a particular skill-set (like music, math, architecture, medicine, sports etc) and

(b) put in contact with forces that can enhance it.

The mandate cannot be any clearer. Use every resource including one’s body, brain, emotion and energy to first develop oneself through this as best as possible and scale the highest peaks in it that one can. Use this individual success as the platform to give back by dedicating the rest of the life to developing the field through oneself. Those who do this well are promoted to better worlds to continue their contributions. Likewise, those who fritter away the opportunity are sent back to the drawing board – not as punishment but to equip themselves better. In short life’s best meaning in cosmic terms is perpetual personal development and positive contribution.

This of course doesn’t mean that one has to renounce every joy, pleasure and happiness that one gets in the normal course of life (without chasing it). But one must not lose sight of the primary mandate nor allow anything to jeopardize it!

2. At a philosophical or soular level, the meaning of life is to fine-tune one’s state of mind to the greatest possible degree of resolution that eliminates the very concept of opposites like light and dark, sound and silence, good and bad, positive and negative and takes it to a level of perceiving both “is” and “is not” as one and the same.

~Chitravina N Ravikiran regarded as one of India’s greatest musician-composers in world music today, debuted as a child prodigy at the age of two and invented the Award Winning concept Melharmony. Hailed as the “Mozart of Indian Music” (Wisconsin State Journal) who brought “New audiences in world music” (CNN Television), Ravikiran is renowned as “Perhaps the greatest slide player in the world today” (Radio National, Australia) and acclaimed for his “Teasing precision and dazzling effects” (New York Times) on his 21 string slide, chitravina. He is the youngest Musician to win the President of India’s artistic “Sangeet Natak Academy” award for excellence.
www.RavikiranMusic.com