Reid Hoffman: The network philosopher and the meaning of life 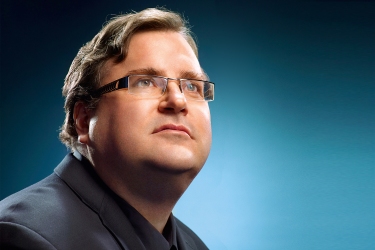 This bright Saturday morning, Hoffman is talking about the meaning of life. “I don’t see it as happiness,” he says. “It’s nice to be happy. But the meaning of life is meaning — what’s the impact you’re having on the world. Suffering to accomplish that is a perfectly fine thing.”

“One of the conversations I remember having with him was what is the meaning of life. His answer was it has something to do with the people you spend your life with and the connections you make. That ethos has very much informed Reid’s thinking — that there are questions about how to connect people, how to create new types of community that are at the core of what you need to do to make the world a better place. Reid thought through the social networking part of the internet revolution earlier and more methodically than anyone else.”

“What makes the meaning of life is people, so you try to be good to people immediately around you and in your broader community. So a lot of my projects are about how I can affect the world in the hundreds of millions. I only spend money when it helps one of these vectors.”

“From an early age I thought of myself as someone who hangs with the adults,” he says. “How society should run, what is a meaningful life, these questions I encountered fairly early.”

“There’s a Warren Buffett-like element, whereby Reid is very good at making money and investing, but is strangely indifferent to spending it,” Thiel says. “He lives in an average four-bedroom house in Palo Alto. It’s an upper-middle-class life.”

“When we were going public, I sold a tiny amount of [LinkedIn] stock, and theWall Street Journal reported that Hoffman’s buying a second yacht,” he says rolling his eyes. “My response was, where’s my first?

His goal is to encourage all of us to “think about our lives as entrepreneurs, using this playbook as a way five years from now to be in more control of my life, create more value in myself and the world around me, by proactively investing in growing my capabilities and adding more to society. People sometimes think it’s morally wrong to talk about investing in themselves,” he says, animated and engaged. “Absolutely wrong. In a flatter world with more competition, how do you succeed? How do you invest in yourself and gain those skills? You can’t do it accidentally.”

The book, published in February, is called The Start-up of You, and its overarching message is that “every individual is a small business”. Cowritten with Ben Casnocha, it urges readers in their careers to “craft iterative, flexible plans… be in permanent beta… build a network of relationships… budget time for randomness”

Thiel describes LinkedIn as the stealth social network of the Web 2.0 era. “It’s not been as spectacular as Facebook, nor quite as overnight as Groupon or Zynga or Twitter, and it’s the least glamorous of the five big new internet companies of the last decade. But it has the clearest core value of helping people connect with people, mainly to get jobs. It’s probably in some sense the most underrated because of that.”

So it’s not money that’s driving his big ambitions for LinkedIn. “My belief and goal is that every professional in the world should be on a service liked LinkedIn,” he says over breakfast. “Because all of the attributes that apply to a business now apply to an individual, like business intelligence. If you can get better at your job, you should be an active member of LinkedIn, because LinkedIn should be connecting you to the information, insights and people to be more effective.” The only threat to the site’s continued growth would be a failure to innovate.

Thiel says “I don’t know what’s the opposite of a sociopath, but I think of Reid as whatever’s at the opposite end of that spectrum. The anti-sociopath understands other people incredibly well, what concerns they have, and tries to craft things that work for them.”

“I haven’t met a single person in more than 20 years in Silicon Valley who’s more generous with their contacts or time, who’s more willing to listen and learn and brainstorm, or who genuinely wants everyone he meets to become as good an entrepreneur as they can possibly be,” John Lilly, Mozilla’s former CEO

Long-time friend Joi Ito, now running MIT’s Media Lab, says of Hoffman: “He looks at the world as a huge game where he’s trying to optimise for the common good. I don’t know many businessmen with his level of social thinking.” And Elon Musk, a former PayPal colleague and now CEO of Tesla Motors and SpaceX, sees him as driven simply to “create something truly useful to fellow human beings”.

As Hoffman sees it, we’re moving from an information to a network age. “In an information age, you’ll generally say that the right way to live a good life is information,” he says. “Well, the right way to know which is the right information is a network. Everyone should see themselves as the centre of their own network. It’s the hyperconnectivity — you used to only be discoverable in a network by people talking to each other. If I’m reading a news article, I can now see which of my friends has read it. It’s not just about me, it’s about us. I wanted LinkedIn to be a software platform that would let people take control of their life.”

“I will be very surprised if Michelle and I leave, say, a building,” he says. “The question is how you have an enduring impact in the direction in which people evolve. Money is a social artifact: yes, you can enjoy its benefits, but you also have responsibility to society. That’s what’s great about [Bill] Gates’s pledge [to give most of his wealth to philanthropy].

Hoffman intends to “take intelligent risks for breakout success” — hence his support of non-profits such as Kiva, Endeavor, Do Something and Fonderie47, which provides a financial incentive to disarm AK-47s by turning them into jewelry.