Jean-Paul Sartre: Man and the Meaning of Life

You are — your life, and nothing else. 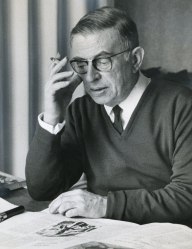 “Life has no meaning, the moment you lose the illusion of being eternal.

Life has no meaning a priori… It is up to you to give it a meaning, and value is nothing but the meaning that you choose.

Man is condemned to be free; because once thrown into the world, he is responsible for everything he does.

Man can will nothing unless he has first understood that he must count on no one but himself; that he is alone, abandoned on earth in the midst of his infinite responsibilities, without help, with no other aim than the one he sets himself, with no other destiny than the one he forges for himself on this earth.

In life man commits himself and draws his own portrait, outside of which there is nothing. No doubt this thought may seem harsh to someone who has not made a success of his life. But on the other hand, it helps people to understand that reality alone counts, and that dreams, expectations and hopes only serve to define a man as a broken dream, aborted hopes, and futile expectations.

In love, one and one are one.”