Dr. Lüder Deecke: What is the Meaning of Life? 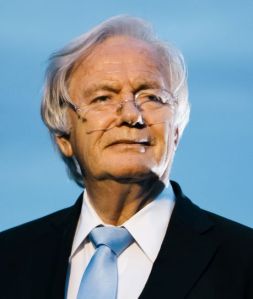 Excellence Reporter: Dr. Deecke, what is the meaning of life?

Lüder Deecke: Life is our supreme good. We do not want to lose it. Therefore, we do cling so much to life, because we (mostly) enjoy life. Death is not our best friend. This throws us to the main question. What is the meaning of life?

Let me answer this with a question: Why do I write a curriculum vitae? Because I want to communicate the meaning of my life to others(!). And what is even more: when famous people write their memoirs, they want to show to others how meaningful their life was. It is their objective to let the world know the whole meaningfulness of their lives. At times they try to explain why they did certain things or made certain decisions in their life and why it was so good, and perhaps even that it was inevitable to decide in this direction, and then a certain belief comes into play. It was fate! It was providence that it happened, and — as a matter how religious the writer is — it was divine providence. Is this the meaning of life? Maybe yes, but!

But what do the atheists do then or the non-spiritualists? Is their life not meaningful? Sure it is! With them not the (divine) providence prevails but another important agens movens takes action. Their own will! Sigmund Freud was incorrect claiming that humans are pre-formed by the genes and by the milieu only. A third element there is there that forms us: We ourselves are forming us! My Mentor Hans Helmut Kornhuber (1928-2009) and I have outlined this in our book — Kornhuber HH, Deecke L (2012) The will and its brain – an appraisal of reasoned free will. University Press of America, Lanham, MD, USA, ISBN 978-0-7618-5862-1

As I said above, the third element that forms us is — we ourselves. In order to do so we have to have freedom though. There are scientists who think that we are not free, that we are rather determined and that free will is an illusion. We are not of this opinion. The philosopher Daniel Dennett wrote the forward of our book, where he says “…about our capacity to make responsible decisions and be captains of our own destiny.”  Thus, we are in good company, and we can also claim Viktor Frankl, who is in harmony with us.

As human beings – biological  living organisms – we cannot be absolutely free, though. Absolute freedom would mean freedom  from nature, which is an a priori impossibility. Thus, biological freedom has to be relative. So human freedom is relative as well. We say we have a freedom in degrees. Human freedom is a special thing. It is not laid already in our cradle, we have to do something for it.

Goethe wrote in “Wilhelm Meister’s Apprenticeship,” “What is the highest happiness of mortals, if not to execute what we consider right and good; to be really masters of the means conducive to our aims?” This line is concerned with happiness as a consequence of doing right. Socrates, Plato and Aristotle had already seen this in that way and even with a view on human life on the whole: it is the honest life itself which is the happy life. According to John Duns Scotus too, happiness results from will. The fact that the feeling of happiness is mostly due to one’s own willed actions, has been confirmed by empirical investigation by Czikszentmihalyi (1992). Karl Bühler (1929) called the joy of children playing, “functional pleasure” (“Funktionslust”). Nietzsche spoke of the happiness of the artists and philosophers and of Homer’s happiness (“The Gay Science,” vol. 4). It is, however, also happiness of the simple and honest man; one could call it the meaning-happiness of the creatives. It is not only functional pleasure, for it does not only restrict itself to doing good, but it also rests in our memory; a great deal of the self-esteem of internalized people is based on this. It is a piece of independence from  the applause of others; it belongs to inner freedom, to a humane autonomy. Viktor E. Frankl correctly pointed out the great importance of the “will to meaningfulness.”

On page 56 we find it again, when we talk about the formation of will in children and adolescents:

The further formation of the will then occurs predominantly by learning from persons who are examples, whom the children and adolescents are following but also by voluntarily setting goals, by challenging themselves, by own effort, by self-exploration and self-finding by the experience of happiness by feeling sense, by “meaning-happiness” (i.e. the inner happiness about the meaning of one’s life), and by experience and by communication.

Conclusion: Now the circle is closed, and we are back at the meaning of life. We ourselves are the ones who make our life meaningful. How? Because we are captains of our own destiny. By this capacity we have the means, the instruments, to make our life meaningful. Let me return to the degrees of freedom: We have to work on them our whole life. How do you do this? By working on yourself. By continuously working at improving  yourself.

Many religious and other institutions teach this. What are they teaching? Self-education! As an example, the Far East may have had the most important teacher of the will and the most efficient one in world history. It is thanks to him that China and Japan have their efficiency. Confucius / Kungtse saw the will in similar terms as the Stoics, the Franciscan monks and Kant. Kungtse taught self-discipline, telling the truth, working actively, stamina and kindness, tamed power of the character, which in itself had effect on the environment. He believed, just as Plato did in his seventh letter, that self-education created harmony without violence.

So my plea for improving oneself is to act as a kind of a Shaolin monk figuratively on one’s self discipline etc. If one says that self-discipline decreases the degrees of freedom, this means misunderstanding human freedom. Self- discipline increases my freedom. So, do make your life meaningful by self-education! This is good self-management. Try to avoid self-mismanagement!!

Here an Illustrative extreme example: If I become dependent from a substance, my laboriously achieved degrees of freedom all of a sudden go down the drain! All my intentions are circling around the procurement of the drug; I am extremely unfree, and my life loses its meaningfulness.

These are my insights into the question “What is the meaning of life?”.

~Lüder Deecke is a German Austrian neurologist, neuroscientist, teacher and physician whose scientific discoveries have influenced brain research and the treatment and rehabilitation of neurological disorders.

Full professor and head, Department of Clinical Neurology at the University of Vienna Medical University of Vienna, professor emeritus since October 2006, Deecke is also head of the Ludwig Boltzmann Institute for Functional Brain Topography and is the author of a number of books and more than 600 publications in the fields of neurology, clinical neurology, neurophysiology, clinical neurophysiology, neurosciences, brain research, movement disorders, etc. One is especially related to the present topic: Kornhuber HH, Deecke L (2012) The will and its brain – an appraisal of reasoned free will. University Press of America, Lanham, MD, USA, ISBN 978-0-7618-5862-1

His early research with Hans Helmut Kornhuber in the mid-1960s led to the discovery of the Bereitschaftspotential (or readiness potential), which is a measure of neural activity in the brain that precedes voluntary movements. This discovery set an important standard in research and rehabilitation of motor systems, and re-introduced the word will in key word registers
www.LuederDeecke.at