Keith McHenry: What is the Meaning of Life? 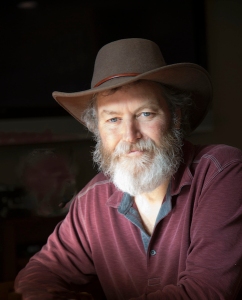 “Do you know about Old Man Park in Oakland?” asked a grey-haired Telegraph Avenue regular. I was sharing vegan meals on Bancroft at the entrance to the University of California’s Sproul Plaza. Testing locations searching for the best place to start a second Bay Area Food Not Bombs meal. He told me about the number of people in need who made this tiny slip of worn out grass home.

I prepared a pot of miso soup and another pot of rice with beans. Loaded up four boxes of bagels from Sid’s House of Bagels on Geary in San Francisco and drove across the Bay Bridge to find Old Man Park.

I found the park. A block size patch of prickly Bermuda grass with a dozen haphazardly placed trees. The ruins of a basketball court on one side almost shaded by a couple of towering palms. Empty dirt lots interrupted by an occasional car body or a pile of cement slabs surrounded the lonely island of grass.

Twenty or more young Africa American men hovered around an abandoned public toilet. A toothless lady guarded her garbage bag of belongings beneath a pine. A dog chases another hound through the southern corner of the lot. Papers and cellophane wrappers drifted across the grassy stubble.

I set up my equipment on a chunk of sidewalk near the bathrooms. A folding table, paper supplies, and food. The more outgoing black men came to see what I was doing. “I have miso soup, rice and beans, and bagels. Would you like some?”

One young man balanced four cups of soup and delivered it to a small group huddled next to the men’s room. He returned for plates of rice and beans and a bag of bagels. I shared the food until it was gone. Not much was said.

I return a week later. Set up in the same location. My menu is the same. Miso soup, rice and beans with bagels and I return again next week. Still, each week very little is ever said. Just the questions about what I was serving.

I started to walk meals over to the older black guys pressed up against the once green building slipping between a wall of shopping carts. One man sat in the place of honor below the concrete ledge that covered the entrance to the restroom. His bloodshot eyes had an empty gaze. His grey beard tangled across layers of grey cotton shirts covered by a tattered brown coat. Three young men struggle to heat something above a lighter in a folded can.

People are busy. Too busy to talk with the only white man in the park. People arrive by car to exchange money and things. Some young black men dart from one person to another. Others sit on the grass or lean against the remains of the restroom.

I take food to the older men who guarded around the door to the men’s room each week. The man at the center of activity seemed to be the oldest. The Old Man of Old Man Park. He directed events with his blank eyes in silence. Several younger guys attended to his needs. They often seemed concerned about cooking what I believed was heroin. The king of Old Man Park never says a word when I arrived to hand him lunch. He never acknowledges me.

I return again and place my table and food at my regular location. Wind bent the tall palms. If anyone was asking me about the meal their words would blow out of earshot. Garbage bounced East through the park.

I hear glass breaking. A beer bottle flies off the roof of the toilet crashing at my feet. Another couple of bottles whipped pass my head. A heavy empty fifth of Smirnoff shatters five feet from my table. The wind picks up and discarded glass alcohol containers started to rain down around me. I dodge an empty 12 ounce Budweiser.

That was enough. I moved my operation to the other side of the building and started to deliver cups of soup to those seeking protection of the bathrooms.

After months of sharing meals at Old Man Park and The Old Man never says a word. He is even more silent than the other quiet inhabitants. They at least whisper amongst themselves. Some occasionally ask me about my food.

I hand the emperor of the park a cup of miso. He takes a sip. “Boy that’s some really good soup!” he announces loudly.

~Keith McHenry, artist, author and co-founder of the Food Not Bombs movement.