Hekataios Amerikos: The Meaning of Life 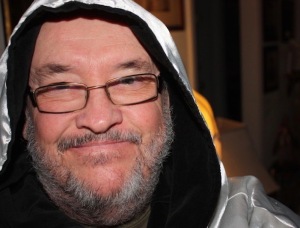 Pondering the meaning of life means that we automatically ask ourselves at least one simple question; “Why are we here?” When contemplating this I am automatically reminded of the first Star Trek movie “Star Trek: The Motion Picture” (Paramount, 1979). In this movie we were introduced to Vger, an entity who was on a potentially destructive journey toward, where else, planet earth. The Enterprise, manned with its most important past crew members, eventually including Spock who arrived late, was dispatched to intercept the intruder. Eventually Spock, waking up from a coma due to contact with Vger, relayed Vger’s intent. He stated that Vger was searching. “It’s asking questions. ‘Is this …all I am? Is there nothing more?’” A bit later, when Vger is poised to wipe out all life on earth, Kirk basically asks Spock what to do about it.

SPOCK: Captain, V’Ger is a child. I suggest you treat it as such.
KIRK: A child?
SPOCK: Yes, captain, a child. Evolving, learning, searching, instinctively needing.
DECKER: Needing what?
McCOY: Spock! This thing is about to wipe out every living thing on Earth! Now what do you suggest we do? Spank it?
SPOCK: It only knows that it needs, Commander. But like so many of us, it does not know what.

This is emblematic of the situation that all humans find themselves in. None of us are born automatically knowing what it is we need or what to seek for or even how to figure it out. We all have to figure it out along the way. And we all make mistakes in so doing. And we are all going to come up with different answers to these enquiries.

But that is EXACTLY what we are here for. We are here to learn. We instinctively want to KNOW. In fact, we have an actual need to know. That is the one thing that sets humans apart from all other forms of life on this earth. We NEED to know.

As trite as this may seem, we obtain most of what we come to know from our experiences. Or, as the ancient Greek philosopher, Platon, might have put it; our experiences simply remind us of that which we already know. We don’t come into this world already knowing how to proceed. That we figure out along the way. But we do come into this life already equipped with knowledge, if only we can access it. The point being that once we access a given piece of knowledge, we come to better understand how to proceed in life. In so many words, knowledge (or accessing it) makes us better, helps us to grow and evolve, and allows us to make better decisions. Most bad decisions are made, after all, either because one did not have enough information or because one ignored what one knew to be correct.

“Is this …all I am? Is there nothing more?” Those who adhere to reincarnation of the soul as the understanding of what happens to us with reference to life’s greatest mystery – that of life and death itself (as I do) understand that death (of the physical body) is by no means the end. In fact, quite the opposite; it is the beginning. Life actually begins with death, as paradoxical as this may seem. Therefore, we can recall knowledge from past lives in subsequent lives, if only we can find a way to access it.

But we must come to an understanding that this is even possible first. This understanding is called “enlightenment”. Once this understanding, or enlightenment, takes place, however, any fear of death is eliminated. There is no morbidity here as any thought of eternal punishment is gone. One truly becomes free to live one’s life without fear.

The ancient Greeks, and some others, used to teach people this simple equation by way of initiation into one or another of the Sacred Mysteries. And only the initiated were allowed to be given this knowledge. Through the process of initiation into a Sacred Mystery one would come to an understanding of what life was all about and what its purpose is. The answer to life’s mystery was revealed! One became enlightened! One was, thereafter, expected to live according to the knowledge that one had obtained in this way.

This, in my estimation, is the true meaning of life. We don’t come into this world already understanding what we need nor how to obtain it. But we do come equipped with the ability, via the knowledge of past life experiences, to figure it out and live a better life this time around because of that understanding. Eventually, after successive lives, living progressively better each time, we have the promise of exiting the wheel of return to the physical body. Thus, our goal is to figure this out in each lifetime and proceed in a better manner each time so that we (i.e. our soul) can eventually become one with ALL.

~Hekataios Amerikos, brought up in rural America, the author has earned four advanced degrees, mainly in religious, historical and philosophical studies. His focus is on the ancient religions of the Euro-Mediterranean world as well as Christianity itself. The author has also served in the US Army as a member of the Chaplain corps and has been deployed to war zones in the Middle East twice.

As an undergraduate in college the author was struck by the fact that he was being taught things about religion that he had never heard of before even though he had attended church and studied his Bible from the time he was able to read. He gradually began to realize that the material that was being taught was, in a way, seen as proprietary to the ministerial profession and that ministerial students would graduate from college with absolutely no desire to share much, if any, of it with the folk. He came to realize that religious authorities generally preferred to keep the folk as ignorant of true religious history as possible so that they could continue to have a monopoly on such knowledge, dispensing it only as they saw fit. Thus, nothing had really changed in that regard since the days of Jesus himself. The author’s studies since that time have only tended to reinforce this original observation.

The investigation that went into the author’s three books, “Apocalypse and Armageddon”, “Killing Roma” and “Pagan Trek” did not take place overnight and has not been rushed by some university system that requires professors to pump out books in quick succession in order to maintain their status. There is no way that these works could have been completed and presented to the folk in, say, sixty to ninety days or even a year.

There are all sorts of books out there, even at this very moment in time, purporting to tell the truth of Jesus and/or of Christianity. And all of these books come from differing viewpoints and serve up different supposed facts. These books are, in the main, quite popular, judging from sales figures. But people still somehow seem to realize that something is missing from the earliest history of Christianity, yet they don’t know what it is and their efforts to discover it are often like trying to grasp air. So they latch onto one or another of these histories and pseudo-histories in an effort to obtain the knowledge that they can’t seem to obtain from just reading the Bible or attending Sunday School classes.

After many years of research, the author has concluded that even the best histories of earliest Christianity leave out some important points. Usually this is simply a sin of omission rather than being deliberate. After all, no one can know everything about that period in time. So people, generally, are still left wanting. These books are meant to fill that gap with real factual evidence and clear details. The simple fact of the matter is that the author wants everyone to know the actual history.