The Beauty of Man and Woman

When we embrace the Real Beauty of relating as Man and Woman, we are invited into the natural expression of male and female.

It is not an idea, that there is a Deep Fulfillment waiting to unfold in their surrender to each other – in their embrace of their Natural Place in the grand scheme.

Their surrender is based on the reality of the union of Shiva and Shakti as respectively the male and female essence. Embodied.

She carries the key to Life, He the key to Death. Both can drop Deeply Down into the Earth and both can Pass Beyond Existence, into the Void, but in depth of embodiment, she is a step in front, due to her easy access to integrate into matter.

As we embrace the full potential of ourselves as humans, He holds Her and She holds Him as they both become an expression of the complete naturalness, with which the embodied Truth in different sex bodies emanate their vulnerability of their specific qualities of male and female. Strength and care, vulnerability and intimacy.

When in the Deepest Intimate Relation, the deepening is constant and ongoing. It leads towards and into the most beautiful mutual cooperation on surrender, devoid of drama, in full taking of care and fulfilled in itself, as a strong connection – a deep bond between Souls – which is a massively supportive container holding both “we”, “me” and “you”, in the human’s way of Life. Integrity is contained, wounds are healed and as life happens, we find ourselves deeper and deeper immersed in the brutality of being peeling down to Naked Souls in Human Bodies. The True Man and Woman.

It is generally, in our embrace of Truth, possible to become completely self-reliant, but the beauty of surrendering into an equation of Man and Woman has no comparison. In other words, that which finds its rest in becoming totally independent, fails to harvest the fruits of coming fully into its gender-specific human maturity. A maturity wherein the self-reliance becomes superfluous by the happening of love for oneself and other in the deepest possible intimacy. A stretching of our Being all the way down into our human – creating a strong integrity along with self-love and navigational skills to handle human situations – even at its hardest.

By embracing the challenge of making our higher realizations JUST as important and valuable as our human lives, we learn to navigate Life from the ground in a way, where the door opens for receiving the Real Value of having a human heart.

In true intimacy of pure relating, there is a deep value to be revealed: a wholeness between man and woman, which is neither co-dependent nor self-reliant. It is Right There – in the middle. Where we can be with ourselves and our individual integrity and hold our hearts as The Heart in the connection, holding both bodies at the same time and each from the opposite strength and force of respectively our masculine and feminine essence.

It is rare in these times, but Man and Woman stands in their unity to become an extension of one another based on Love rather than fear. They feel each other as One Heart but is deeply rooted in their individuality. For the Awakened Monogamous Relationship to be a reality, we must learn how to feel in complete honesty our perfectly imperfect humanness and allow its healing to wholeness and harmony, by agreement to be with and through the pains of our misunderstandings, as we grow into the strengths of our sexes.

It is extremely unpleasant to embrace the journey of the human fulfillment, of Love through True Feeling, but only to begin with and until we have thoroughly come into handling the navigation of ourselves in human integrity as for the love of both. We are moving in the Field of the Feminine – of integrating Being with existence as integral individuality across all dimensions – and No compromises, ideas or self-centeredness can survive in this surrender.

This – our relating – is a grand investigation to uncover the strengths, softness and vulnerability of the True Woman and Man, who are not afraid to Truly Surrender to both the Beyond, Divine and Human. Making no realization any more important than any other, but seeing the value in birth of Truth across every dimension possible for Being/Source to be Born in True Humility of humanity. Embracing in depth the completeness of our human vessel and it’s full potential.

(An article by ©Aisha Salem) 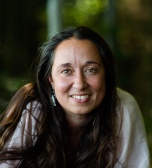 ~Aisha Salem is a woman in deep intimacy with Truth. A radical and life-long journey has brought her to the very Heart of what it means to be a real human being.

She is an inspirator and guide for people on the path of awakening and self-actualisation – as an embrace of reality, which is rooted in the open-ended surrender to Truth – as compassion and deep intimacy with our disappearance.

Aisha has been teaching across the world since 2003 and is the founder of Gateway, which is a growing community of people resonating with her sharing and the invitation to true co-existence on a ground of surrender and responsibility – reality.

Aisha’s being and guidance holds keys to unlocking our perception to the hidden Core within all of us. Inviting us to Truly Blossom into reality by our becoming and unbecoming.