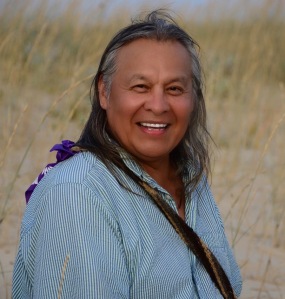 People, who want to know the answer to the universal question of ‘the meaning of life’ oftentimes find themselves in a quandary leading them to circumspection and, eventually, incomprehension of anything else, which leads also to a disregard of any other way of thinking. Could it also be the “inability to comprehend” is so embedded in the Western way of thinking?

Speaking and thinking as an Original Nations person — Lakota: I wonder if asking this question might have to do with the effects of colonization and how pareidolia attempts to make up for loss of self; and quite possibly for those in identity crises, their lack of familiarity with lands already familiar to Original Nations of the Western Hemisphere (pre-Columbian, pre-America). Thus, the lack of establishing a land as home and destiny according to one’s ancestral culture and a beginning is to always eradicate the history of the cultures that have been consistently generous to Mother Earth — now and into the future.

Somewhere lost in the anthropic principles of the Euro-Westerners who are often heard to ask the questions of “who, what, when, where and why” is the question once again of “how does this happen that I don’t know?” And their applications of theory to all other peoples’ origins except their own is quite often the default mentality or the “go to” to further explain why they are here in a different land than their ancestors.

Denial speaks louder than words when it is invisible to those drowning or swimming in the actual language of privilege. And as someone has said: “the first weapon drawn in a conflict is language.”

Let’s look outside that perception and see the concepts differently. A stone is hard, water is an ocean, a fire is a volcano, a tree is plant life. And the fifth element? It is you. But, you cannot be an element if not for all the other elements. You cannot live without them. You cannot exist in the element of stone and earth; you cannot exist and breathe in water; you cannot exist within a fire, and you cannot exist as a tree or plant life. It is impossible to live within any of these elements. But, all of those elements can exist and be alive within you! All of those conscious, intelligent elements, those sacred elements that cannot be measured as to how their energy in existence lives as much as those sacred energies always fluctuate beyond the ‘measuring’ –– beyond scientific proof that something is alive.

A rational mind can describe the elements in the body while an intuitive sol (not the Western ‘soul’) can feel the elements alive and be able to speak those languages of the elements — fire, earth, wind, and water.

The rational mind is the human living within the hierarchy of a box that seeks to capture it through its own narcissistic addiction to the anthropocentrism of a society or a people who hold themselves up as somehow more grandiose than others in that box of conscience. It deadens the intuitive or non-dogmatic life.

This is where the separation begins —with a concept and a word that doesn’t exist within many intuitive languages, such as Lakota. That word is domination.

Domination is at the crux of anthropocentrism’s self-importance and the belief that the rational mind is supreme above all the Beings of Consciousness and Cognition, therefore relegating the self into an isolate boxed mindset species of the human races.

In the vernacular of an Indigene trying to ameliorate a relationship to languages of intuitive values, senses and living in the balance with Mother Earth, this is also a detriment and in direct contrast to the very rational mind of domination and its manipulative, measuring, weighing, possessing, objectified and subjecting of false authority. So now it would seem war and conflict — the way of the West’s human —would be an easy way out to describe why they unknowingly fight against their own elemental consciousness and try to hammer it into the rational box they’ve built on hierarchy, dogma, elitism, domination, class, race, anthropocentrism, and all the isms that accompany the rationed package or give it more levity than the relational Indigene.

~Tiokasin Ghosthorse, (Mnicoujou/Itazipco Lakota) is a member of the Cheyenne River Lakota Nation of South Dakota. Tiokasin is an educator, musician and international speaker on peace and the global issues facing Native peoples. He has a long history in Indigenous activism and advocacy. Tiokasin is the Founder, Host and Executive Producer of the internationally-syndicated “First Voices Radio,” now in its 27th year of broadcasting. In 2016 Tiokasin received a Nomination for the Nobel Peace Prize from the International Institute of Peace Studies and Global Philosophy. He is a 2016 Native Arts and Cultures Foundation National Artist Fellow in Music and in 2018 was an inaugural nominee to the National Native American Hall of Fame. Tiokasin describes himself as a “perfectly flawed human being,” who is a Sundancer in the tradition of the Lakota Nation
www.FirstVoicesIndigenousRadio.org