Kristin Tieche: My “Meaning” of Life 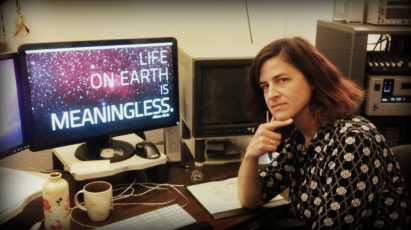 It took me a long time to come to terms with it. And when I tell people how I feel, they usually A) think I’m joking, or B) try to convince me otherwise.

But I’ll have none of that. When I made this realization a few years ago, I felt so liberated and free. I felt elevated and enlightened.

Q: What is the meaning of life?

A: Life on earth is meaningless.

How did I come to this realization?

Maybe it’s because my cat never asks this question.

Maybe it’s because I’ve seen the show at the planetarium too many times.

Maybe it’s because the daily news is too hard to take.

Maybe it’s because I’m totally ok with knowing that we really don’t know anything.

All these political systems we’ve created. All the faiths we decide we believe in. All this work we think we have to do. All these numbers that supposedly measure our value in this world.

Meaningless to the laws of nature. Meaningless in the expansiveness of the Universe.

Why should my human life having meaning, but that rock over there have no meaning? Or that drop of water that evaporated? Or that tree that has become scratch paper? Or that pig that you call bacon?

Nature always takes its course, and responds accordingly to however we humans have modified the world over the millennia. Nature never asks why we do anything. Never asks why we exist. It just keeps going. The Earth keeps rotating and revolving and will keep on doing that whether I have a million dollars or zero. Whether I write my novel or binge on Netflix. Whether I find true love or die alone.

And what is this planet we live our lives on but a tiny speck floating in a vast expansiveness that we know almost nothing about? Scientists can’t completely explain what the universe is, and if it has a beginning, middle or end.

When I finally came to terms with my non-­‐meaning, it was as if the weight was suddenly lifted. I was free to do whatever I wanted, and I no longer had to make sense of my surroundings, or do something with my life. I simply had to be like nature, and exist. I just had to keep breathing, and wake up the next day.

I bring this feeling of liberation to every moment. If I am here, alive, with a conscience, then I must experience this existence to its fullest. Every moment, until I’m gone.

Yes, I found the holy grail, and it’s empty. But that’s ok. There’s a beer over there with my name on it.

~Kristin Tieche is an award-winning filmmaker and editor. A natural storyteller, she is versed in broadcast television, film and digital media alike.
www.KristinTieche.com